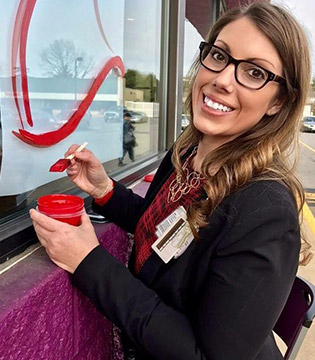 The devastating impact of multiple deaths among family and friends compelled Shannon Hunnicutt to join the American Heart Association in 2008 to help fight heart disease and stroke. But her own personal story deepened that commitment more than she ever thought possible.

Shannon thought it was just a migraine

Shannon was only 32 years old when she got out of bed and felt a pop in her neck. She remembers a surge of pain that raced to the top of her head and "a very strange sensation." She was on a trip for the large hospital system she worked for, far from home. Since she was familiar with the signs of stroke, she quickly went down the checklist: slurred speech, paralysis or weakness in her face and body. She had none of these. A long history of migraines seemed a reasonable and more plausible explanation.

After the intensity of the ordeal subsided, she still felt dizzy and her vision blurred. She also had a terrible headache, but that wasn't new—she'd had migraines all her life. At first, it didn't seem like anything worth pursuing, but within a week she sought help.

No one could tell Shannon what was wrong with her

Her "migraine" grew worse and wouldn't go away. Her blood pressure was high. She had weakness in her left arm. She went to urgent care. The staff misdiagnosed a pulled muscle and gave her medications for that and her headache. She saw a neurologist. She ended up in the emergency room. She doesn't blame the PAs and others who saw and tried to help her. She was 32 years old. Who thinks of stroke when they see a 32-year-old woman?

Shannon finally gets a diagnosis—an unexpected one

On November 6, 2013, Shannon went to the E.R. A precautionary CT scan and MRI confirmed that a tiny blood vessel at the base of her neck had torn, opening the way for blood clots to release into her brain. This caused a series of strokes. Turns out, she’s had a condition called stenosis, a narrowing of the carotid artery, possibly since birth.

According to the American Heart Association, someone has a stroke in the U.S. about once every 40 seconds, and it accounts for 1 of every 20 deaths. Shannon was fortunate to be alive.

Her ordeal has illuminated a few basic truths: You should take charge of your own health through activity and eating right. And you should live life to the fullest.

Shannon's advice? Be your own health advocate.

Most of all, Shannon stresses the need to be your own health advocate. She couldn't get an immediate appointment to see a neurologist because of her age and migraine history. There was a two-month wait, she says, because doctors didn't consider her headaches a symptom of stroke. "If someone doesn't feel right…you have to keep pushing for yourself. You have to be a self-advocate," she says. And after 22 days without treatment, Shannon finally got the correct diagnosis.

Shannon went through months of rehabilitation and initially returned to work only part-time. She later resumed her full-time schedule. She credits her co-workers, friends and family for being there during her recovery. They still help her today. Co-workers will tell her that she looks tired before she knows it herself. She has to be "humble and learn to listen."

Shannon is passionate about the American Heart Association

Shannon is passionate about her support of the American Heart Association because stroke kills someone in the U.S. about every 4 minutes. She uses her voice to help find cures and raise awareness and she urges others to choose the American Heart Association. "It does the most good to prevent heart disease and stroke", she says. She points out that "stroke could happen to anyone. We are all affected by it. There is no discrimination."

Today, she participates in Heart Walks, volunteers, fundraises and tells her story whenever she can. She also reaches out to support groups, to connect with other survivors who understand her experience of stroke. Hopefully, Shannon says, her story will inspire others to help prevent heart disease and stroke.

Shannon keeps her life in balance

The stenosis is still there. But Shannon hasn't had surgery and maintains her health with a regimen of medications she will take for the rest of her life. She keeps her life in balance so she doesn't live in fear of another stroke. She has a positive attitude and takes time to have fun. She eats healthy, exercises and has lost 100 pounds since those dark days four years ago.

"I finally took charge of my life," she says. Shannon gets out into the world. She has some limitations set by her doctor—no rollercoasters! But she loves to travel and even zip lines. When she calls up her doctors to get permission for a new activity, they often laugh at the over-the-top things she wants to try. But Shannon is determined to fully embrace her second chance.