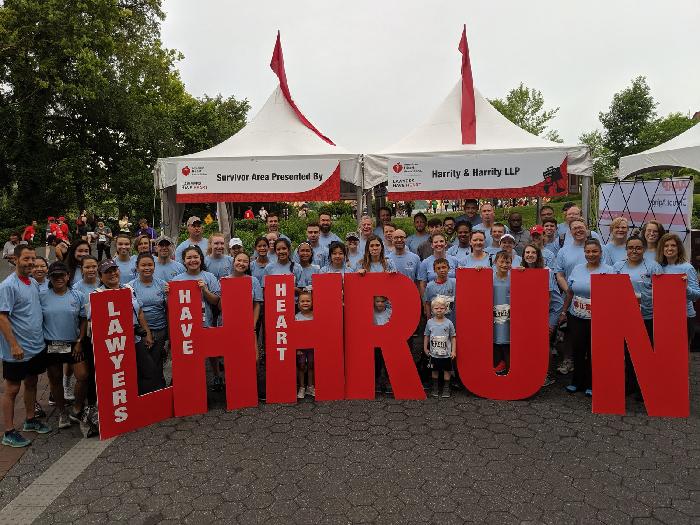 The American Heart Association (AHA) Lawyers Have Heart DC race is just around the corner on June 13, 2020.  As the Co-Chairs and Platform Sponsor for the 2020 race, Harrity & Harrity is doing its part to get the word out about the race, and to raise money to support AHA.  This race is personal to us as our managing partner, John Harrity, survived a widow maker heart attack on May 2, 2016.  Here is John’s story in his own words:

“On May 2nd, 2016, I played in my regular Monday night basketball game. In a five minute time span that night, I went from feeling fantastic, which I do almost every minute of every day, to feeling a kind of discomfort that I had never experienced before in my life.  As I was exiting the gym to get some cold air, the discomfort intensified.  I asked my friends to call 9-1-1 and then I passed out.  I woke up 3 weeks later in a bed at Fairfax Hospital.  That night on the basketball court, I experienced the worst type of heart attack you can have.  It’s called the widow maker.  Hours later, when I’m at the hospital, my situation got gravely worse.  I experienced bleeding into my lungs, which sent me into respiratory distress, and eventually led to multiple organ failure.  During that first day in the hospital, my wife was told more than a half of a dozen times that the chances of me surviving were very slim.  During those first few weeks in the hospital, while I lay unconscious, my body fought off numerous blood clots and infections.  My cardiologist said the odds of me making it through those first few weeks were a million to one.  But, what the doctors didn’t realize, what they didn’t know about me, is that I had been training for this event my whole life.  For most of my life, I have exercised 7 days a week and followed a very strict diet.  And, it was my obsessiveness about exercise and my diet that helped me survive.  Well, I eventually woke up 3 weeks after my heart attack, unable to speak and unable to move.  From the second I woke up and understood what had happened, I was laser focused on two things: getting back to 100% and ensuring that I don’t waste my heart attack.  You see, I feel that if I just went back to my old way of life, then this traumatic experience would have been for nothing.  And, as anyone who knows me would know, I have no intention of wasting my heart attack.  So, during the following 5 weeks, as I lay in intensive care regaining my ability to speak and move, my twin brother and I had many conversations.  We knew we needed to do more, we needed to be purpose driven. And, it was in that bed at Fairfax Hospital, that the foundations for our Harrity 4 Charity was born.”

You can see his segment from CBS news here – https://www.youtube.com/watch?v=9U8uyWAriys.