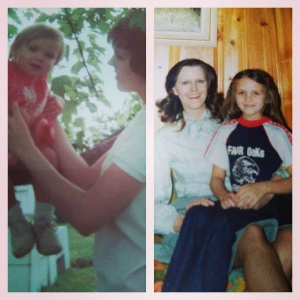 My mother’s Dad, Carl, died the Thanksgiving before I was born in January of 1971.  I was to be his first grandchild, and everyone has told me my whole life how excited he was that “Junior” was on the way.  He was a career railroad man, working as an accident investigator at the time of his death.  He was at work on a train and he never got to go home.  He died of a “cardiac event” (that’s what they called heart problems back when they didn’t know what happened) and my Mom never got over it.  I think my Opa and I would have been the best of friends, as everyone comments on how similar we are with our dry sense of humor, our outlook on life, and our general optimism.  It affected my mother, her sister and brother, and my Oma (German for grandmother) in ways  no one could have imagined.  But they all, despite their emotional scars, persevered.

I was raised by not just the greatest single Mom of all time, but one of the best people of all time.  She was beautiful, kind, and loving.  While she did not put up with what she called “foolishness,” she would have given the world to me if she had it.  She was the picture of health. . .loved her Jane Fonda aerobics on the VCR (apologies to those who are too young to know what Jane Fonda aerobics or VCRs are), had a little garden in the backyard where she grew more vegetables that two people (one who hated vegetables) could ever eat, never smoked, rarely had even a drink.  We camped in the north Georgia mountains every summer where she would out-fish me and out-swim me, all with a smile on her face and a laugh that make everyone around her laugh.

I wasn’t the easiest teenager to be around, but she had the patience of a saint with me while never wavering on her expectations.  Just as my junior year of high school was getting into full swing, it was all over.  My Mom got up from her cubicle at work one day to go get some more water and that was the end.  She collapsed and was gone by the time the ambulance arrived.  She was pronounced dead on arrival at the hospital.  The end.

Some background you need to know about my Mom, Barbara.  She took responsibility for her health.  She was smart.  She was healthy.  Because of her father’s death, she saw a cardiologist EVERY year.  She would come home with a monitor strapped around her for a day, and after returning it to the doctor, would always come home smiling with a clean bill of health.  She had done this less than three months prior to her death.  And yet her death certificate is very clear and succinct – cardiac dysrhythmia and mitral valve prolapse.  Her heart betrayed her.

Fast forward a few decades and I was the hard-working single  mother; mind you not near as good a one as my mother and definitely  not one with as many good habits as her.  My (seriously fabulous) daughter was in elementary school, we lived in a paradise small town on the panhandle of Florida, and I was working at my first job in Revenue Recovery.   I was 36 years old.  It was a random day at work (yes, I still to this day remember what hospital’s accounts I was auditing and finding tons of underpayments in) and after having returned from the restroom, I couldn’t type my password to unlock my computer.  I knew my password.  I was focusing, thinking about it letter by letter, but what my fingers were doing was not what my brain was telling them to do.  We all know the “three strikes, you’re out” password rule, and I was out.  Despite feeling very odd, I walked over to the IT guys and my brain was telling them that I locked myself out of my computer after having typed in my password wrong.  What came out was “noodle.”  That is not a typo.  I literally looked at a grown man and said “noodle.”

I’m lucky that my brain was still with me and I had the wherewithal to go to the cubicle of the nurse that worked with us.  I didn’t even need to speak; she saw what at that point was apparently a drooped side of my face, one arm with a fist clinched, and my eye on the same side of the body drooping as well.  I still remember her digging through her desk for an aspirin and when I couldn’t swallow it, she almost forced it down my throat.  She calmly told someone to call 911 and took me outside to sit down.  She had me breathe into a paper bag to calm down, as I was understandably freaking out.  In my mind, it was my time to have a cardiac problem and die just like my Mom and Opa.  But it turns out that it wasn’t my time to die.

After some very scary times at the hospital and months in countless doctors’ offices, therapy that included speech, physical, and occupational work, and the world’s greatest child singing the alphabet and nursey rhymes with me to get my speech back, I was almost back to normal.  Try explaining to people that you, a perfectly healthy thirty-six year old, just had a stroke.  Who would have thought?  I sure wouldn’t have.  It was horrible.  Strokes are horrible.  Despite the medical treatment, I don’t think I would have recovered without the help and love of my daughter.  She, as a child, willed me back to good.  And it worked.

So, that’s my story.  While I’m not the best at skipping bad habits, I try to be the best I can be to ensure that I’m here for my fabulous daughter and amazing family until I’m so old that I’m on their nerves.  I don’t share this story with many people because I have ZERO desire to be seen as sick or someone in need of pity. I am neither.  I’m a happy, perfectly healthy person.  I got sick one day. . .and I go to the doctor on a regular basis to ensure I’m not going to get sick another day.  It’s that simple.  Don’t pity me.  Don’t feel sorry for me.  DO take ownership of your health.