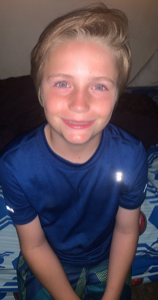 I walk for my son, Clayton. Clayton was born on 3/2/11. He was a healthy 7lbs 5oz. I noticed something didn't seem right with him but couldn't put my finger on it. He got tired easily and spit up more often than my previous 2 babies. Plus I felt like his feet were so cold, his whole body felt cold. But he received a clean bill of health. At 4 days old he started breathing weird and grunting. I hurried him to the hospital because I just felt like something was really wrong. They were getting very low oxygen readings on him and an X-ray showed an enlarged heart so we were transferred to Albany Medical Center. There they began running tests and at that point the only issue was low oxygen. Then Dr. Kamenir came in to do an echo on his heart. At that point we got his diagnosis and within seconds the nicu team filled the room to stabilize him.

He was diagnosed with an Interrupted Aortic Arch Tybe B with a large VSD. His body was shutting down and had I waited even an hour longer he would have gone into cardiac arrest. He had a rough few days and doctors were not optimistic he would survive until surgery but my stubborn little guy starting improving and was healthy enough for open heart surgery at 2 weeks old. Dr. Devejian performed the survey to repair his heart. He had some complications but after a few days seeing him pink and alert was the best feeling ever!

Today Clayton is a typical 11 year old. He likes hanging out with friends, Pokémon cards, soccer and his pets. He wants to be a pediatric cardiologist when he grows up to help kids like him.