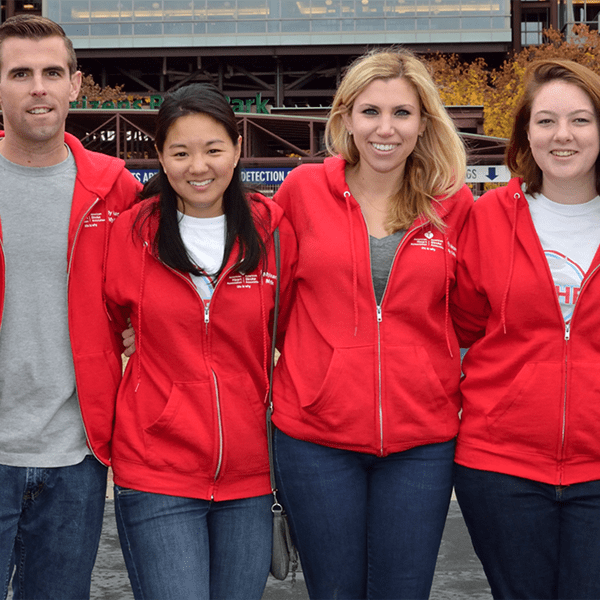 Life is Why! Join me in supporting the American Heart Association!

My WHY, my dad, my father-in-law and my teammate

My dad, Robert Perry, had his first heart attack in the 80’s when he was in his 50’s. At the time, the science and capabilities were not what they are today. If he would have known the warning signs and had the screening available today, he most likely would have had a few stents inserted and been back to work in no time. However, he was unaware of the signs and by the time he sought medical care, it was too late. He had a heart attack, followed by double bypass surgery. After a long hospital stay and many weeks hugging his pillow to soften the pain, he was on his way to recovery. He was lucky. As he grew older, he developed many other complications including diabetes and prostrate issues.
When he was in his late 70’s he suffered from congestive heart failure. After many hospital stays, it was discovered his aortic value was not working properly. The concern was that he was not a viable candidate for open heart surgery because of his medical history. At the time, we heard about a new procedure. Transcatheter Aortic Valve Replacement (TAVR), in trial, was a noninvasive procedure; which repaired the valve through non-invasive surgery. The procedure was in advance clinical studies, and candidates had to be accepted. After feeling hopeful about the option, we were disappointed to learn he was not accepted into the program due to his various medical issues. Eventually, as the study advanced, he qualified for the program and was able to live another 3 years. His passing was unrelated to his heart condition.
My father-in-law, Al Paparella’s dad passed away in his fifties from a heart attack. My father-in-law several years ago needed a value replacement and by-pass surgery. Thanks to routine checkups, advancement in technologies and screening, my father-in-law, who is in his eighties, enjoys his great grandchildren today.
Years ago when I was playing soccer, as the halftime whistle blew, Carl Ritter, a teammate, suddenly collapsed. At first, I thought he was joking but then I saw the twitching and heard a noise. Luckily, the president of the club was at the game and had a key to get the defibrillator. No one knew how to administer the device but we followed the instructions and he was shocked 3 to 4 times. A group of soccer players, with no prior experience or knowledge, were told by a policeman to continue until the EMTs arrived. When we met him at the hospital, the doctors said the actions by those on the field and the defibrillator saved his life. If a defibrillator were not at the location, he would not have survived. He continues to play soccer today.
These are my “WHYS”. I am thankful for the impact the American Heart Association has had on my life. I would like you to join me in helping us make a difference for family, friends and our community.

Don’t you want to be a part of something special and make a difference?  Imagine the impact if we reduce death and disability from cardiovascular diseases and stroke by 20 percent by 2020. Please help me reach this lifesaving goal by donating today. Together, we can make healthier, longer lives possible for everyone.