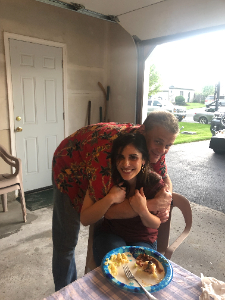 In loving memory of our daughter Nikky

We hear a lot about heart health.  We know it's important to eat well to keep the arteries clear and to exercise to keep the muscle strong.  But there is another equally important component to heart health - the electrophysiological part.  The heart receives an electrical impulse to keep it beating, and many things have to be in place for this to occur: proper hydration, the right levels of sodium and potassium, etc.

The absence of this electical impulse can lead to sudden death.  Sudden death syndrome is a loosely defined umbrella term for a series of syndromes that cause sudden death by cardiac arrest.  One of these is congenital Long QT syndrome (LQTS).  People with LQTS may be at greater risk when they exercise (LQT1), when they have an adrenaline rush (LQT2), or when they are asleep (LQT3).  LQT3 comprises ~5%-10% of LQTS.

Our dear daughter, Nikky, died of sudden cardiac arrest, presumed to have been caused by LQT3.  This is our effort to increase awareness of this condition.  Here is her story written by my wife:

On January 7, 2020, Nikky was found dead on the bedroom floor of her Manhattan apartment.  She apparently collapsed as she got out of bed and lifted her arms to remove her pajama top.  Since the medical examiner could find nothing wrong, she ordered genetic testing.  The results showed that Nikky had a variant in the SCN5A gene, which controls the sodium channels to the heart.  This variant, combined with other conditions (perhaps as simple as being dehydrated from a kickboxing class the night before or being prescribed a medicine with the warning "caution with prolonged QT"), likely caused a Long QT interval; the timing of the electrical impulse was off, and her heart didn't beat.

Driving back from that most awful trip to NYC in January 2020, we remembered two prior health incidents in a new light.  One Saturday when Nikky was a senior at SUNY Albany, we got a call that she was at Albany Medical Center.  A friend had called 911 when Nikky wouldn't wake up in the morning, her eyes rolled back into her head.  By the time the EMTs had arrived, Nikky was awake.  When we got to the hospital she said that it was "crazy that I'm in the hospital, I am fine."  The doctor said she had some type of seizure.  Being a holiday weekend, they wanted to keep her until Tuesday for tests.  But on Tuesday the doctors said too much time had passed for the tests to be of any value.  My guilt - why didn't we follow up to ask "what were you going to test for?"

A few years later, Nikky called one morning from her apartment in Brooklyn, "Mom, I just woke up on the bathroom floor.  I must have passed out on the way to the shower."  She asked "do you think something could really be wrong with me?" My guilt - I said "you should ask your doctor, but you know, that happened to dad a few years ago."

After Nikky's cause of death was identified, our family was prescribed genetic testing (a simple swab of the cheek from a mail in kit).  My husband also has the variant.  They say relatives should get cardio and genetic screeening in cases like Nikky's, but that appears easier said than done.  A family member has been desperately trying to get screened since her child experienced a seizure similar to the one Nikky had in college.  She has thus far been unable to get a prescription for the genetic test, only appointments for cardiac testing.  But if the condition Nikky had only presents during rest, will a stress test disclose the problem?