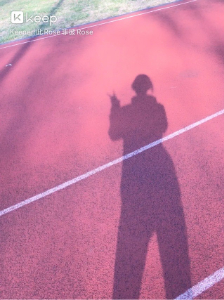 I am not good at running since I was a child. I remember I fell behind in all type of running competitions. My high school's "passing line" for 800m was 4'30''. And I tried very hard to pass it by diligent practicing, rather than my classmates, some of whom can easily get full score. Concerning of failing my PE class, I even had nightmares of running super super slow. Running means breathlessness and timing limits.

I never tried to run more than 800m since my high school, until I started to live in Shanghai in 2008, nearby the beautiful Century Park. Century Park has one of the best outside running routes in Shanghai--5k, with tree shades and even signs every 100m or 200m telling you how much calories you have burnt! There, I see a lot of people walking and running at morning, noon and evening. You'll almost never see yourself as the only runner!  There are so many colleagues in Morgan Stanley Shanghai who run! There is always at least one GVM event every year relating to running in Century Park.

When you are at the right place, surrounded by the friends who have same interest, it's very hard to not to try once! Unlike my teenage memories, there are no rules and time limits! So forget about the running nightmares. What I really want is to complete that 5k with fresh air, running or walking. How easy is that!

Several years' ago, I moved to New York. I started to explore running routes. And I found the beautiful Great Neck South High School playground. Although I cannot simply walk to the playground and run whenever I like, I make it a routine for my weekends.

After 10km, you feel peace, love and kindness.