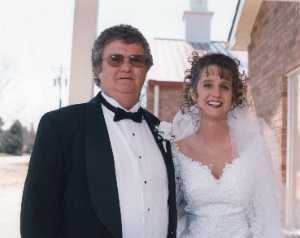 If you know me, you know the love I have for my dad.

He is why I walk---he is why I raise money for this important work.

First, I would like to tell you about my hero. He was tenacious, hard-working, and he never gave up. He never complained. His constant inner fight was inspiring, his work ethic amazing.

His heart story started when he was only 48 years old and suffered a heart attack. He was working night shift at the time. He got off work in the morning and tried to go to sleep. Unfortunately, the chest pain was too much and he asked my mom to take him to the ED. There his heart stopped beating effectively-- he was shocked and quickly transported to Duke Hospital where they decided his heart needed to rest for a few days before surgery. During that time, his heart muscle continued to fail/die. We now know that waiting is not the best thing to do and the faster the vessels get opened or bypassed the better the outcomes. We know this from research conducted through the American Heart Association. He underwent double bypass surgery and was in the hospital for 14 days. He never complained, never gave up, did exactly as the physicians told him, and went back to work quickly after surgery.

A few years later, he began to have some swelling and shortness of breath. After an evaluation with his cardiologist, he was told he needed to have one of his heart valves replaced with a mechanical heart valve. He underwent surgery at Duke Hospital with Dr. Donald Glower. After surgery, he was put on a medication named coumadin. This medication requires multiple and frequent blood draws to assure correct dosage. Despite the blood draws and surgery, my dad never complained and he never gave up. Instead, as before, he went back to work to support his family.

In November 2016, after several months of increasing shortness of breath, dizziness, and profuse swelling, we were told the most devastating news that dad had heart failure. From that day on, I watched him fade quickly away. However, being the fighter that he was---he began the fight for his life and it was hard. This fight meant more days spent in the hospital than out, numerous heart catherizations, more IVs and blood draws than anyone could count, several PICC lines, countless doctor visits, medications galore, a pacemaker and AICD, and he never once complained. He stopped eating salt, took all of his medications, and decreased his fluid intake---he measured everything and kept track of it all (with the help of my mom). He did exactly as the incredible heart failure specialists at Duke told him....and he never complained and never gave up. He just wanted to spend more time with his family....so he fought heart failure with all that he had---however, it just was not enough. His kidneys became tired, his heart simply got weaker. I watched him go from an independent, strong 180 lb man to a frail 124 lbs on his last day on earth. He lost that battle to heart failure and stepped into the arms of Jesus on March 11, 2019 and I have not been the same since.

I do not want anyone to suffer the way my dad did. The heart failure road is a long and difficult journey. Through my grief, I walk and raise money to fund important research so other daughters can have more time with their daddy.

I walk for better heart medications with less side effects, for improved procedures to help identify heart issues earlier, and for new and innovative devices to support heart function.

Will you consider making a donation to this important work? Together we can decrease suffering, give more time to families, and inspire others to never give up!