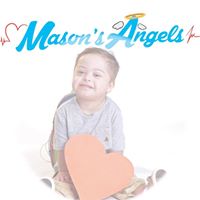 Mason Cruz Villagran was born a twin to his sister Malaya Villagran on November 23, 2013. He was born with ASD/VSD and AV valve deficiency and lung disease. He had 3 heart procedures along with over 20 blood transfusions within his first 10 months of his life of which time he lived in the NICU for just shy of 6 months. Mason had several other procedures for other health issues that are common with heart pediatric babies.

Mason was a true warrior during his short life inspiring so many at Children's Hospital and Ochsner Hospital.

Despite his medical challenges Mason was always a happy boy. With over 7 surgeries, (20) transfusion and multiple procedures he remained resilient. This Angel was a shining light in his family and those around him at Children's Hospital and Ochsner. Mason gained a lot of friends and fans as a result of his happy character. He loved to clap, dance, play ball, and watch Pancake

YOU can join our team as a team sponsor on our team shirts!  For more details contact Masonsangels@gmail.com