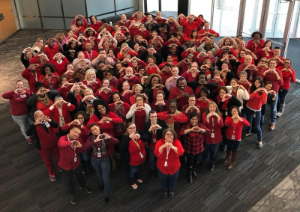 I first became involved with the Heart Mini and the AHA through my company, Ensemble Health Partners. From the start, I was hooked! I learned so much about what this important organization does.
Did you know that the first external defibrillator was invented through research by the AHA? And the first implanted pacemaker? And the first artificial heart valve? The list goes on and on of critically important scientific breakthroughs to combat death from cardiac illness that were supported by funding from this organization.
And it’s funny, the more people you talk to about “their why”, the more you see that every single person you know has been impacted by either heart disease or stroke – either personally or by family/friendship associations. Another important thing to note is that, though the AHA is known for their heart disease impact, which is the #1 killer of Americans, the cool thing is they’re actually the American Heart and Stroke Association, impacting the #5 killer of Americans too. A close family member to me suffered two strokes at the age of 41, the first of which went undiagnosed for the first 24 hours because he was misdiagnosed due to his age and presentation of symptoms. This is exactly why it’s so critically important for education to be prominent and available for everyone; so that those with vague or uncommon symptoms can be identified and intervened upon early. Women are another example of a population that go undiagnosed because the varying symptoms like nausea/vomiting as opposed to the more common symptoms of left arm numbness and chest pain that men experience, cause them to ignore their symptoms. The educational resources available through the AHA are so valuable and should be shared with as many people as we can reach, so that folks can be educated and know when to take action!
We're on a journey to raise $100,000 this year for the AHA, and I'm on a personal journey to raise $5,000. Please consider supporting this cause with a donation to my page, or better yet, by joining my team for the Heart Mini on March 13!!
View More
View More
Donate Now
Team Roster
Raised