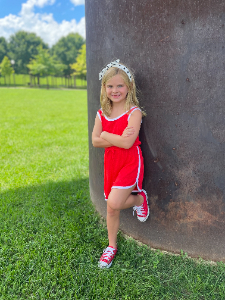 On July 8th of 2015 we welcomed our first child, Remington Jane, into the world.  As many of you know, words cannot express the joy that moment brings.  At a hefty weight of 9 pounds, 2 ounces she appeared to be the picture of perfect infant health.

Remi seemed to have a great appetite and, from early on, slept through the night, but her weight gain was marginal, which made regular weight checks with the pediatrician necessary.  Multiple trips led to numerous different attempts to try to get her weight up. On top of this, she seemed to have respiratory issues that led to many breathing treatments at the doctor and at home. After a couple of months of things not getting better while seeing the nurse practitioners at the pediatrician’s office, motherly instincts kicked in. She demanded to see the pediatrician. That’s when, for the first time, the doctor heard a heart murmur.  That week consisted of x-rays, EKG and an Echocardiogram.  Eventually, we found ourselves talking to pediatric cardiologists who determined that Remi had a Ventricular Septal Defect (VSD), a Patent Ductus Ateriosis (PDA) and a Patent Foramen Ovale (PFO).

Basically, according to the cardiologists, Remi’s heart, at times, was working at four times the normal rate for her size, especially when she was expending energy trying to eat. And her brain was choosing rest over food, which meant that, eventually, Remi would die not of the heart defect itself, but of starvation, if nothing was done.

The cardiologists broke the devastating news to us that Remi’s VSD was too large to heal on its own and would require open heart surgery.

While the surgeons were confident, they also had to prepare us for the possibility that the complexity of Remi’s surgery could cause her to die.

During the 13 days that we had to prepare for Remi’s surgery, we cried, prayed, cried more, prayed harder and enlisted the help of our friends and family to pray also.  Brittany and I were mentored during this difficult 2 weeks by a support group called Mended Little Hearts. Mended Little Hearts is supported by the American Heart Association.

On November 10, 2015, Remi’s sick little heart was mended!  When we heard the surgery had been a success we flooded the waiting room with tears of joy. Everyone’s prayers were answered.

After Remi’s 10-day recuperation period at the University of Oklahoma Children’s Hospital, we brought Remi home. Just a few weeks after her release from the hospital and followed by release by cardiologists in Oklahoma, Remi was well enough for us to move our family back to Southern Indiana.

Now, fast forward. Remi is living her life to the fullest. As an outgoing seven-year-old, we now annually celebrate her “Heart Day” and Remi is now more cognisant of her scar and why it’s there. It’s also so cool to watch her become more and more excited each year with the meaning of the Kentuckiana Heart Walk and how many of her friends and family come together as “Team Remi” to celebrate her life and support the cause.

Being involved in the Kentuckiana chapter of the American Heart Association is one of our ways of paying it forward so that others in similar distress can have access to the constantly-improving technology, tools and support necessary to cope with the physical and mental challenges that come with heart disease. Remi and her family have been massive beneficiaries and we are so grateful.