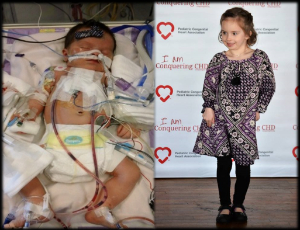 My daughter was diagnosed with the congenital heart defect Tetralogy of Fallot when I was about 25 weeks pregnant with her. It was caught on a random ultrasound, and I’ll never forget how chaotic, emotional, and terrifying the subsequent days were as we tried to get answers about what exactly her heart anomaly was. While most of the conversations we had in those first few days are a blur now, I’ll never forget what the Cardiologists at the Cincinnati Children’s Heart Institute said to us after they did an Echo and formally diagnosed her. They said “don’t worry, we handle this all the time.” While there is high variability in the severity and individual outcomes of those with congenital heart defects, they reassured us that Tetralogy of Fallot was well-researched and had been successfully operated on for decades. In fact, the very first open-heart surgery was conducted on a young child with Tetralogy of Fallot in the 1940’s. This was depicted in the movie ‘Something the Lord Made.’ If you haven’t seen this movie, I highly recommend it. This all underscores just how much research and innovation has taken place to get us where we are today with diagnosing and treating congenital heart defects.

Getting back to our story, we were followed closely at the Heart Institute for the remainder of my pregnancy, and she had a normal, healthy birth on Leap Day in 2012. After she was evaluated, a timeline of 6 – 8 months was given for her first surgery. However, she had a cyanotic episode at the Pediatrician’s office during her 1-week checkup, and we were immediately sent by ambulance to Children’s. At 9 days old, she had open heart surgery to do a full correction of her defects. Her heart was the size of a Walnut at the time. The knowledge and skill of the surgeon and his team were remarkable and I’ll be forever thankful for what they did for our family. We were in the hospital for a few weeks and her overall recovery took a few months, but by the time she was about 4 months old, she was essentially a normal baby with no major restrictions.

Now my daughter visits her cardiologist at Children’s annually to monitor her progress, but she is otherwise a thriving kiddo who loves reading, learning about animals, and playing with her sister. Because of what they had to do during her surgery as a newborn, she will eventually need a value replacement when she is in her early teens. Back when she was an infant, the surgeon told us that by the time she needs that 2nd surgery, he expected that it would no longer need to be done via open heart and could instead be done via cardiac catheter which would essentially be a minimally invasive surgery. We have been following the progression of this procedure, and they are so very close to being able to do that with TOF patients. Again, such a testament to how the medical community has made immense progress with improving the quality of life and overall outcomes of kids with congenital heart defects and their families.

In summary, my Why is all about the life-saving research that continually furthers the treatment and prevention of heart disease, whether congenital or acquired, which is made possible by funding from the AHA. Thank you for supporting this mission!