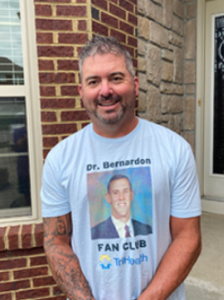 This is the story of my brother Bill from 2020.  This is one reason why I do this!

Many physicians are accustomed to patients expressing their gratitude toward them – but not many see a patient walk in with a custom T-shirt with their face on it!

Bill Reckner walked into the office of Michael Bernardon, MD, a TriHealth primary care physician, wearing a T-shirt with Dr. Bernardon’s face on it. Why? “I think that he saved my life,” Bill said.

“The murmur was very prominent,” said Dr. Bernardon. “This was something I hadn’t heard before, so I ordered an echocardiogram, which looks at the heart valves and function.” Bill returned to the office afterwards and learned more about what was going on and develop a plan with actionable steps.

“This is one of the more common congenital defects that presents when the person is an adult,” said Louis Brunsting, III, MD with the TriHealth Heart Institute who performed Bill’s surgery. “With bicuspid valves, there is one big leaflet and one small leaflet,” continued Dr. Brunsting. “The big leaflet develops scar tissue over time, which narrows the area that blood can move out of the heart. Symptoms of aortic stenosis can include shortness of breath with exertion, which can also lead to irregular heartbeat, atrial fibrillation, lightheadedness, and congestive heart failure. Once symptoms develop, there is a high rate of death within 2-5 years if the stenosis is not correct. “

Bill had never developed any symptoms.

Bill had a minimally-invasive surgery, so his recovery was quicker than during open-heart surgery. He received a mechanical valve.

“A mechanical valve requires the patient to take blood thinners, but they don’t wear out as quickly as bioprosthetic valves,” said Craig Sukin, MD with the TriHealth Heart Institute. Dr. Sukin also said that after Bill’s surgery, his life expectancy went back to normal. “It was very important to identify and treat this bicuspid valve,” Dr. Sukin said. Bill continues to see Dr. Sukin to ensure that everything is functioning as it should.

Bill’s recovery has been going smoothly, and he recently decided to express his gratitude by wearing it across his chest with the custom-made T-shirt featuring Dr. Bernardon’s photo proclaiming himself a member of the Dr. Bernardon Fan Club.

“I was very surprised and kind of flattered that he would do that,” said Dr. Bernardon. “It was very unexpected!”

Both Bill and Dr. Bernardon use their story as an example of why people should regularly see their primary care physician.

“I think that with building that relationship with Bill through the years, the connection and trust was there,” said Dr. Bernardon. “I am very thankful that I was able to find the heart murmur, and we worked together to impact his life.”

Dr. Bernardon went on to emphasize again that Bill regularly coming in for appointments helped to save his life, as coming in regularly can help to pick up things that would otherwise go undetected.

The effort is worth it, for both patient and physician.

“Just one life is worth it to me,” said Dr. Bernardon.