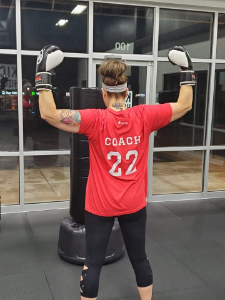 I walk because I know that with every step, I’m making a difference in someone’s life. And when combined with a million other Heart Walk Heroes across the nation, we have an even greater impact toward curing heart disease and stroke.

The AHA and the Heart Mini are extremely important to me because the foundation saved my life.   8 years ago while working out of state I had a pretty serious stroke that landed me in ICU far away from any family, friends or familiar doctors. That major stroke was followed by several "mini" strokes, that would go undiagnosed for 3 days. The neurologists were completely stumped, and they had no idea what was making me, a very healthy, 34-year-old female, continuously stroke. Finally, the head of the neuro department ordered a full body scan on me. I will never forget that Sunday afternoon when the young ultrasound tech came in to my ICU room to do a U/S of my heart. He put the wand up to my chest and almost immediately dropped it. Repeated the same action and left my room. I then heard a frantic page overhead for a doctor stat to my room. That began one of the hardest, scariest journeys of my life. I remember the Cardiologist being extremely reluctant to tell me the results. He knew I was 1500 miles from home, completely alone thinking that I was having neurological issues. Results showed that I had a racquetball size tumor in my heart, the proper name: an atrial myxoma.  To make things more complicated the tumor was attached by a tail and was floating back and forth between my ventricles.  Due to the movement the tumor was capable of lodging between the left and right heart ventricles and if it did I would die instantly. Making the situation worse, I was still suffering from mini strokes and on Coumadin as part of the treatment,  due to issues with bleeding you can’t have a surgery that extensive while on Coumadin. So, I was faced with my first of many tough choices: do I take a chance and stop the Coumadin and fix my heart or do I stop the strokes and take a chance with my heart? I thought of my daughter who would be leaving for college in a couple of weeks and made the decision to take a chance and fix my heart.
My open-heart surgery was scheduled for two days later - ironically on my birthday. My parents and boyfriend were called so they could all make the trip in. In the meantime, I was left to lay there and think about how two days earlier I was fine, working a double shift, going to the karaoke bar with the consultant team I traveled with, and now I had suffered 11 strokes, and was being prepped for a surgery that I was given a 60% chance of surviving. There is nothing in the world that can mentally prepare you for that position.
The short ending to my story, is I went from being a completely independent woman, too not being able to do basic functions that we take for granted each day. It took me almost a year before I could go back to work. I lost everything from financial stability, to self-confidence.  Depression set in and I did not think I would ever make it to where I am today.  Thru the different AHA educational platforms, and programs I was able to drive my recovery, and become a stronger person.  If was not for this organization, their research and their capabilities I am not sure that I would be here today.