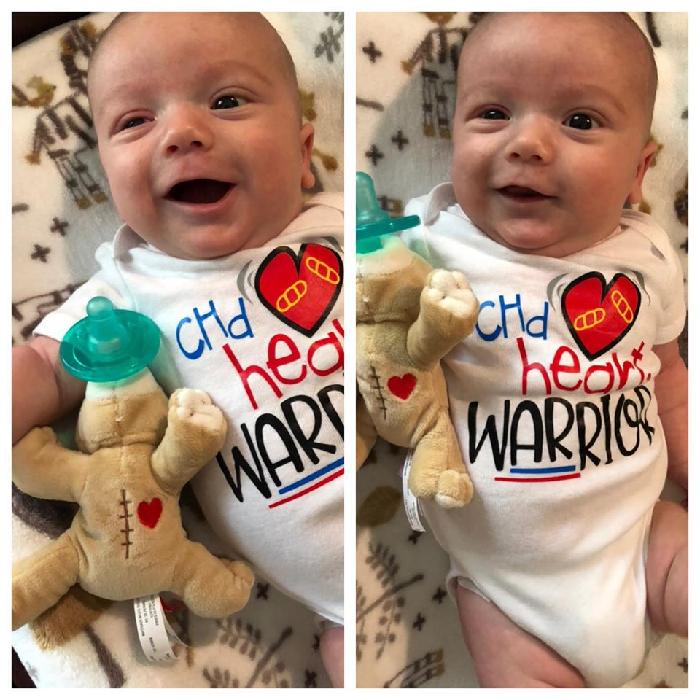 On August 2, 2019, my husband and I welcomed our little baby boy - Frankie III.  On August 4th, we found out he had a rare form of Congenital Heart Disease - Tetralogy of Fallot, which included a large Ventricular Septal Defect (VSD - a hole in his heart).  VSD's alone are not uncommon and if small enough, close on their own.  That was not the case for us.

Flash forward to November 8, 2019.  At just 14 weeks old, our baby had open heart surgery under the expertise of Dr. Najm at the Cleveland Clinic.  Due to complications with a viral illness he had, his post-op stay was delayed a bit but he's definitely a fighter.  He was discharged home one week later.

He's never had failure to thrive (being underweight), which is the most common symptom of CHD.  He's never had "tet/blue spells," likely because the TOF and VSD counteracted one another, according to his Cardiologist, Dr. Jou at Fairview Hospital.  We have been fortunate enough that symptoms have never been an issue, but saying he's kept our family on our toes feels almost like an understatement.  We really have no sense of what's "normal" for a newborn baby.

Almost three months later, and he's such a happy baby.  He still loves to eat, he's pretty much on course with developmental milestones, and his prognosis at his post-op visit with the Cardiologist is looking good - we've been told to treat him like a normal baby (which is so hard because he's such an amazing little man!).

I've personally participated in the Heart Walk since 2014; this year, it means a little something more.  I've experienced first-hand the importance of organizations like the American Heart Association.  Because of research they and other organizations perform, my baby boy is able to live a healthy life and have a promising life expectancy.  Kind donations made by friends and family make this possible and I cannot properly express how grateful I am that medicine has been able to advance this far because of them.

Join us in the walk this year!  Donate or not - your support and company is all we ask.  But Frankie will be there and he loves company! :) We look forward to walking with you!