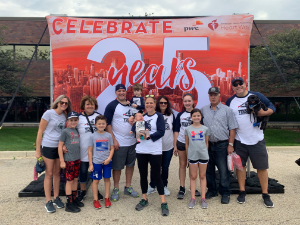 In January 2017, we welcomed our first born into our family, Vincent Alfredo John. Little Vinny would change our lives forever in more ways than we would have ever imagined. After time spent in the NICU and genetic testing, our son was diagnosed with a condition called Long QT Syndrome and that is where our story begins.

According to the American Heart Association, Long QT Syndrome is an infrequent, hereditary disorder of the heart's electrical system that can occur in otherwise healthy people. It usually affects children or young adults and can be inherited or acquired by medications. When a child has LQTS, the lower chambers of the heart (ventricles) take too long to contract and release. When recorded by an electrocardiogram (EKG), the time gap between the Q and T points on the waveform is too long, even if by fractions of a second. Nearly half of the patients that have LQTS never have a symptom, but some arrhythmias related to LQTS can cause sudden cardiac arrest and are potentially fatal.

Due to the fact that it can be inherited, we were suggested to also have genetic testing done. If one of us are carriers, there would be a fifty percent chance that our future children could have LQTS as well. Both of us went ahead and had the genetic testing done as suggested. Remember how we mentioned earlier that nearly half of patients with LQTS NEVER have a symptom? Well, low and behold, Erin found out that for 32 years she has had Long QT Syndrome and never even knew!

Fast forward to 2019, we welcomed our second child, Stella Grace. With a fifty percent chance of our little one having LQTS as well, we took every measure to make sure the pregnancy, delivery, and NICU stay went smoothly. The pregnancy was monitored at Advocate Heart Institute at Christ Medical Center, which is one of the top heart programs in the country. We worked with MFM and pediatric cardiology teams and were even fortunate enough to participate in a research study at the University of Wisconsin in Madison. We were able to detect abnormal fetal heart rate and rhythms through the use of fetal magnetocardiography (fMCG). The fMCG is located in a magnetically shielded room and is a noninvasive technique for recording magnetic fields generated by the electrical activity of the fetal heart. This tool can detect the baby's QT interval in utero and gave us a better idea if she would inherit LQTS, which, she did. The fMCG room is currently the only one in the United States and this is due mainly to the cost which is in excess of $350,000. Hopefully, with additional research and funding, this tool can be made available to more health settings in the future to help families with similar situations like ours.

Our new normal involves keeping regular appointments with our electrophysiologists, the kids take a daily beta blocker, and we watch for a few things to avoid potential arrhythmia triggers. This includes certain medications that prolong the QT interval and some physical exercise, such as swimming. After meeting with a genetic counselor and through additional genetic testing, we have found that Erin's mom and brother are also carriers of the syndrome.

Everyone is doing AMAZING all due to DONATIONS made by all of YOU! Our family is proof that donating can make a world of a difference to families in need of answers to make things a little less scary and a lot more normal.

So, this year we will continue our tradition, but it will look a little different due to the current global pandemic we are experiencing. We're virtually Heartwalking on September 19th to advocate not only for our family, but for all others that are affected by various cardiovascular conditions. Over the past three years our team has raised $14,555! Please help us go above and beyond our goal from the 2019 walk by DONATING today! Through research and by working together, we can make healthier, longer lives possible for everyone.