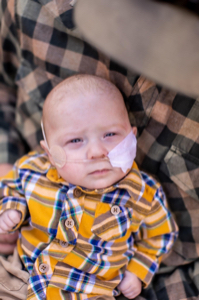 When I was just 16 weeks pregnant, the doctors noticed something abnormal on my ultrasound. Levi was then diagnosed with dextrocardia meaning his heart is backwards. Now that he is almost 6 months old we know he has Dextrocardia, Transposition of the Great Arteries, Pulmonary Stenosis, Narrowing of the Left Pulmonary Artery, Straddling of the Valves, a few VSDs (holes in the heart), and his chambers are not aligned so he will need another patch and a conduit to help with blood flow.

He was PDA valve dependent at birth so on August 19th he had his first surgery after being stable and big enough. He has a BT shunt in his PDA valve and had Pulmonary Artery Reconstruction. He will need multiple surgeries throughout his life and will get his next one around January 2023.

I have been walking for my cousin Ella who was born with Tetralogy of Fallot 20 years ago and now I would like to walk for my son Levi.

We would love for you to join us to raise money and awareness for CHD research. ♥