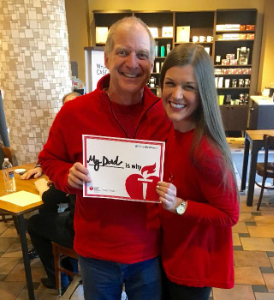 My Dad is why.

13 years ago my dad had a heart attack. He was 52 years old at the time and seemed to be in good physical condition. He wasn’t overweight, ate fairly well, and had a workout regimen. But one of my dad's main arteries was 100% blocked.

The morning it happened he had just returned from working out. He had just done weights that day, no cardio. However, he was breathing hard still, as he had just been running laps.  He showered then ate his breakfast and said he felt a little queasy. He went into the bathroom thinking he might get sick. He didn’t but when my dad came out of the bathroom I told him, "you don’t look good." Then I walked out of the house and went to school.

My dad said he looked into the mirror and saw he was sweating all over. There was pressure on his chest. The pressure increased and he called 911.

The ambulance and fire department came and took him to the hospital where an arteriogram was performed and the blockage was found. An angioplasty was then performed and his recovery began. All this took place in less than 2 hours.

I am thankful for the research, education, and awareness American Heart Association has provided to our community. However, heart disease and strokes continue to be the #1 killer of all Americans.

My dad is my hero, role model, best friend - hallelujah for survival, stents, and his strong recovery!