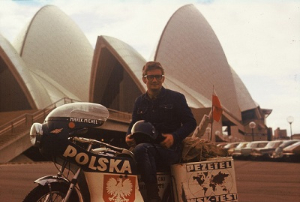 Life is Why! Join me in supporting the American Heart Association and the memory of my Father, Marek Michel.

I’m not just walking. I’m Heartwalking for my dad who passed away in 2014.  In 2013 he suffered a stroke while driving that changed his life, the little that he had left.  Prior and after the stroke, he battled a heart condition and ultimately, pancreatic cancer won the fight.

He was a man of the open road, a globetrotter who visited over 100 countries by motorcycle, inspiring people along the way, leaving his patriot footprint and tracks behind painted white and red as our countries' flag.

For my father, I will skip, walk, jog and run until the end of the earth...