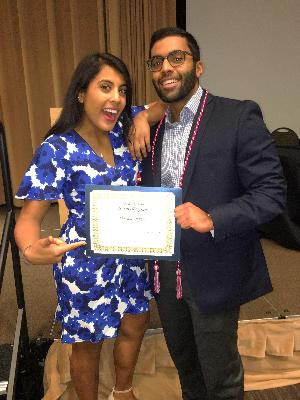 Hello! I am running my first marathon this fall in honor of my brother Shivam Chokshi. My parents took the time to write a little bit of Shivam below.

"This is the story of our beloved son Shivam, who died at the age of 21 due to Lymphocytic Myocarditis on July 25th, 2018, his half birthday.

On January 25, 1997 we were blessed when we welcomed our healthy and happy baby boy into our life. Growing up, Shivam was always known for his silly nature and high energy. As he grew older, he took all his energy and crafted it into discipline. He was intelligent, studious and relentless in all that he did in high school. While in high school, Shivam still found the time to play football and wrestle, hold down a part-time job and was involved in Boy Scouts. He was very active, healthy and athletic. He graduated with high honors and was destined for success in his future at DePaul University. During his college years, Shivam studied Finance and Accounting and added an abundance of activities to his plate. At DePaul, he served in a variety of leadership roles but greatly enjoyed mentoring with the EDGE program, being an Orientation Leader, and working as a Chicago Quarter mentor. With Shivam’s hard work, dedication and commitment to his academics, he was named to the Dean’s Honors List and was scheduled to graduate early in December 2018 with a full time offer at an investment bank waiting for him.

On July 21, 2018 Shivam came home to celebrate his dad’s birthday. We all had a great time and we were so glad to have all of our favorite people together. I ordered an ice cream cake for my husband and Shivam had the smallest piece even though he loved ice cream cake. I offered him another piece and he looked at me and said “mom, I don’t want it, I’m not feeling well”. His asthma was acting up, which was normal for him as he grew with pediatric asthma. He used his inhaler and he was fine. That evening, my daughter drove him back to his apartment in the city. He complained to his girlfriend that he had a hard time breathing and she offered an inhaler to him. He used his nebulizer, which is a larger treatment for asthma. He had no other issues from Sunday to Wednesday of that week. He even went to the gym on July 23rd and 24th without any health issues.

On July 25th, our lives changed forever. As an investment banking intern, it was common for him to be at work in the evening. We were talking in our family group chat about how my daughter found another apartment to lease very close to him. He said he was so excited to share the city and be neighbors with her. He read our last message at 7:37 PM. At around 8:30 PM my daughter and I got a call from his co-worker that Shivam had a seizure. He had fallen, and they were performing CPR on him and taking him to the hospital. It was strange – Shivam never had a seizure before so this didn’t make sense. We were informed that they were taking him to Northwestern Memorial Hospital in Chicago. We reached the hospital around 10:19 PM. According to the doctor, our boy left us at 10:07 PM, but that was when they stopped performing CPR. It was likely he was already gone before they even made it to the hospital. We did not have time to say goodbye to him. His life was cut short by this disease and our lives will never be the same.

The question that hits us the most is why? He was such a healthy boy. He regularly worked out at the gym and played sports. How could this be happening? As a mother, I would have traded places with my son in a moment. I asked God to “take me instead”.Shivam's Story
3 months after his passing, we received the autopsy report and were told he passed away due to lymphocytic myocarditis. It was random, and it was rare. It gave us a sense of closure but still left us with so many questions about what this disease is and how it works. HIS EKG/ECG were normal, along with all of his bloodwork that was completed during his physical in May 2018.

Myocarditis took our healthy, happy, amazing son away from us at the age of 21. He never got to fulfill his dreams. He never was able to start a family. He had so much potential, so much talent, so much to look forward to. He wanted to live more than anyone else I have ever met. Everything he did was for his family and for his future.

As Shivam often referenced Eleanor Roosevelt’s quote, “Great minds discuss ideas; average minds discuss events; small minds discuss people”. He had the biggest dreams and hoped to build a school in India where children who cannot afford to pay for school can still get an education. We hope to fulfill that dream one day.

Although Shivam is no longer with us, his legacy lives on in us through the lessons we learned from him and in the many ways in which he touched our lives. We love him very much."

Thank you for supporting American Heart Association. Your contribution is greatly appreciated.