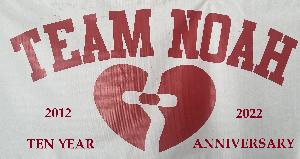 Last year this group of only 85 riders raised $124,906 (event record) for the 40th Anniversary of the Beach Ride!! This year is the 10th Anniversary of Team Noah!! I don't know how but I hope we find a way to break last year's record. Come join the celebration!! All are WELCOME on Team Noah!!

We have members from all over South Carolina, Georgia, Florida, West Virginia, Virginia, North Carolina, and Tennessee. We have a great time at this event! We have our own “Team Noah Tent” (campsite 6412), eat breakfast together every morning, special suppers together every night and have Team entries for all the Beach Ride contests (T-shirt, parade, campsite decorating, etc)! We have even put on a fundraising BBQ while we are there for the whole campground!

New members are always welcome to join “Team Noah” and follow Noah’s progress, along with us, every year at the Beach Ride. If you are willing, we would love to have you join!

Below you will find Noah’s Story written by his mother back in 2013. It’s always a good reminder to me of “Why we Ride”.

Fast forward to 39-weeks, a Tuesday, October 23, 2012 (I am skipping all the boring, emotional, worry wrought weeks in between where I was repeatedly scanned by the Pediatric Cardiologists) to where I gave birth to a beautiful, 8 pound 9 ounce, 22 inch long perfect little boy who we named Noah Samuel Moore. He had a flawless head full of black hair and was a dream. I knew he needed an echo to look at his heart but I fully expected to be told that he had an ASD (atrial setpem defect) and that he would be checked again in a few months. I expected to be going home. But about nine hours after he was born, Noah was taken from me and placed in the NICU. You see, what I thought was wrong, was wrong, but he had a much more significant and acute issue. He needed medicine to protect his heart and he needed it immediately. To say I was emotional is an understatement. The next morning, a man I had never met walked into my hospital room and said “I have been in the NICU with Noah for the last hour”. He is Noah’s Pediatric Cardiologist and he brought understanding and a reality I could comprehend. He told us that Noah had a coarctation of his aorta (a narrowing that prevented the lower part of his body from receiving adequate blood flow) that had a 90% chance of needing a correction before we went home. He was right. We were also told that Noah has a biscuspid aortic valve, mitral valve stinosis, hypoplasia of the aortic arch and was mildly hyporplastic on his left side.

So, on Sunday at five days old,Noah was airlifted to MUSC. I flew with him on a fixed wing aircraft. He was examined immediately and on Monday, my husband and I met with Noah’s surgeon. After an extensive conversation, we signed the release and on Tuesday, on his one week birthday, Noah had heart surgery. His coarctation was repaired and Noah did wonderfully. His surgeon decided, much to our delight, that it was best to leave Noah’s hyporplasic leftside alone and that it would hopefully grow.

We were discharged to go home on Saturday (the day of the Beach Ride 2012) – only four days after surgery! After over a week without being allowed to eat, Noah was slow to nurse and we had our troubles but at 10 months, he is still going strong. A hiccup in his recovery was that it took 16 long weeks for his incision to heal.

Fast forward one more time to today. As I write this, I am watching a busy, chunky, wild little man! He is into everything and his cardiologist assures me he will have no limitations. His repair was performed using an “end to end” technique and he has no artificial tissue! The technology has developed so much in treating congenital heart defects that my precious son went home 4 days after his procedure and today is doing wonderfully. I cannot thank the American Heart Association enough for the tireless work that is done to fund the research that saved my son. Every dollar you give, every dollar you raise and every moment you dedicate to this cause may not get an immediate pat on the back, but please let me say, from the bottom of my heart, that this Momma thanks you, commends you and prays for you so that other children will be as blessed as Noah has been!