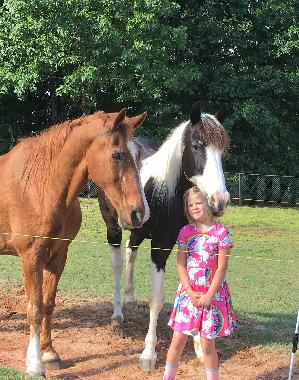 This will be my 5th year getting to ride for the American Heart Association. I'm riding again for Marylise.  She's just had another procedure at MUSC as a continuing Heart Patient and came through it with great results.  She's not scheduled for another procedure until next Year!  Continued prayers appreciated that she remains Covidfree, healthy and doing well!!  See her story and updated information below from her mom.  I managed a 4th place finish in raising donations last year, hoping to do better this year!!  Thank you in advance for your support!!

This is the story of Marylise ...

Marylise had her first open heart surgery at 11 months old. Her surgery lasted nearly 12 hours long. During our long stay at MUSC, we received care packages from the American Heart Association. In addition to that, we learned how much the American Heart Association donates to places like MUSC to improve technology for such cases as Marylise. My family and I are forever grateful that Marylise has the best heart care because of generous donations. Marylise is now eight years old. She still continues to go to MUSC (because of the best heart technology) every six months for heart catheterizations. Her next procedure is May 29, 2020. She has had two stints so far and will continue catheterizations until her arteries grow on their own. She will also be facing another open heart surgery when she turns about ten years old to replace the valve and tube attached to her heart. Thank you for making all these surgeries possible by donating to improve technology especially during this Covid 19 crisis!!!