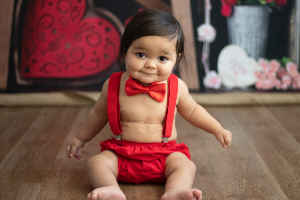 At 5 weeks old our son Elijah was rushed to Boston Childrens via ambulancce after a doctors appointment. For the 5 weeks of Elijahs life prior to this night he was eating constantly but not gaining any weight.. Mom and dad knew something was up. So at his appointment with his pediatrician mom told the doc... "I dont know what it is but I feel something in my gut that something is wrong." We went to Umass, they consulted cardiology just as a formality.... The Cardiologist walked in and even said himself " we have no reason to believe this is anything cardiac but we will cross our T's and dot our I's." We sat there as they did an Echocardiogram on our 5 week old, and I knew... these dont usually take that long. It was found that Elijah had TAPVR. Total anomalous pulmonary venous return (TAPVR) is a birth defect of the heart. In a baby with TAPVR, oxygen-rich blood does not return from the lungs to the left atrium. Instead, the oxygen-rich blood returns to the right side of the heart.... This is something that is usually picked up during pregnancy, Elijahs was not. It was absolutely unheard of that it was not picked up during the pregnancy, immediately after birth... and UNBELIEVABLE to all of the doctors that Elijah survived 5 weeks like this at home. We were rushed to BCH and Elijah was intubated and medically paralyzed that night and rushed to the OR the next morning. We were told as new parents that our son had a 60% chance of surviving due to how long he had already survived with this condition. After the longest day of our lives the amazing surgeon came out and told us our son survived but we still had a long road ahead of us. We spent the next 3.5 weeks in Boston Childrens ICU watching them finally be able to close his chest after a week, slowly start removing the chest tubes, taking him off the paralytics and bringing our son back to us.

So now we have made it our mission to not only bring awareness to our sons story, but every child with CHD. They are the tiniest little warriors.

Elijah Jaylen just so happens to be our personal warrior.